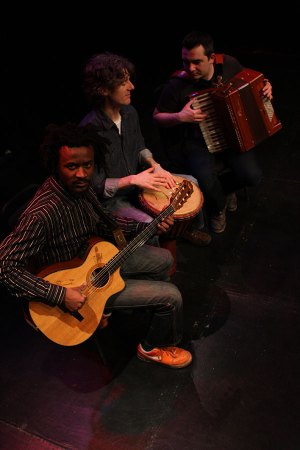 Between August 29th and September 10th, 2013, a Deis-funded residency took place in Cork, which allowed three musicians from different disciplines, Éamonn Cagney, Niwel Tsumbu and Martin Tourish, to collaborate on a body of compositions, primarily those of Éamonn. Key among the trio’s objectives was to develop concepts surrounding the use of grooves, the highly syncopated rhythms of the Congolese tradition and improvisation using the melodic language of the traditional idiom. This event was live-blogged and covered by the media (RTÉ, RnaG, Journal of Music etc.) helping build an audience prior to the first gigs. An Irish tour ensued and the trio was named Treelan. The success of the first tour has prompted the trio to pursue a debut recording, hopefully to be released in late 2014.